You can grow flowers in your Animal Crossing: New Leaf village. There will be flowers in your town automatically, and new flowers may appear at random. In addition, your villagers might plant new flowers, and you can buy flowers in the garden shop. If you build a police station, you might find flower seeds in the lost and found.

By placing certain types of flowers and certain colors next to each other, you might have a chance of growing a hybrid flower, which is a flower of a rare color.

How to Grow Hybrids

To make a hybrid flower grow, you have to put two flowers of the same variety (such as two roses, or two cosmos, etc.) next to each other, and water both of them. To guarantee a new flower from the pair, bury a bag of fertilizer next to one of the flowers. A new flower can only appear if there are empty spaces next to the pair of flowers. The new flower might be a unique color that can't be purchased in the garden shop and can't randomly appear by itself in your town.

There can be up to five new flowers in your town each day. New flowers will only appear next to flowers you watered the previous day. However, putting incompatible flowers next to each other (e.g. a cosmos next to a lily, etc.) and watering one of them, or watering a flower that is not next to any other flowers, will reduce the number of new flowers that appear the next day.

Therefore, if you want to have the best chance of getting hybrid flowers, you should use the Beautiful Town Ordinance and only water the flowers that you want to breed together to make new flowers and do not water any other flowers.

On days when it rains or snows in your town, all flowers get watered, so the new flowers the next day will be random.

To have better control over which flower pairs create new flowers, plant only two flowers next to each other; don't plant three or more flowers adjacent to each other.

Also, when a new "child" flower appears in your town, it inherits some of the color information from its parents. The new flower's color information can influence the colors of its descendants, which can result in undesired colors when trying to grow a specific hybrid. Because of that, it is recommended to purchase new bags of flower seeds and use them to create hybrid flowers instead of using flowers that appeared in your town after watering.

If you want to create more of the same type of hybrid:

The following table lists the best known methods to create each unique type of flower.

There are ten types of flowers that can grow in your town: 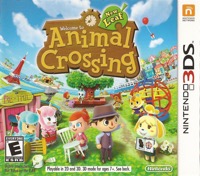 Animal Crossing: New Leaf for Nintendo 3DS
Get help with games!
Go to list of all games