What Are Power Circles?

How Do I Use Power Circles?

You can place Power Circles on your farm just like you would place a Farm Circle. When you look at the list of Farm Circles that are available to you, Power Circles will be marked with a star. You can press X to see what that Farm Circle's power is, and the size and direction of its effects.

For example, if it shows an arrow pointing upward, and it says that the size of the effect is two fields, then the two fields above the Power Circle will receive the power.

When you place a Power Circle, the affected areas will sparkle.

You can put multiple Power Circles around fields and barns to give them more than one power or boost the effects of a single power. For example, you can put a Cow King Statue next to a barn to reduce more stress when brushing and petting your animals, and you can put two Cow King Statues next to the barn to double that effect. Most powers can be multiplied up to four times, but Maker-boosting powers can only be multiplied up to two times.

The following farm circles are power circles. Their effects are listed below. 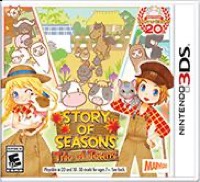