After you destroy the orange E.M.M.I. in Hanubia and defeat a Chozo Soldier, you proceed to Itorash.

Go to the left and go clockwise around the room. Use the Total Recharge Station if you wish, then go through the door on the right to save your game if you wish. Go through the door to the right of the save room, then use a Power Bomb to break open a hole in the upper right. Go to the elevator at the top. Please ensure that you have updated your game before you proceed. Version 1.0.0 had a game-crashing bug that could affect the following part of the game.

After you use the elevator, there will be a cutscene.

Hold R throughout the battle to lock on.

If Raven Beak aims upward, get close to him quickly, using Flash Shift if necessary, to avoid the damaging field he creates throughout most of the room. As soon as Raven Beak finishes this attack, jump upward Flash Shift away to avoid his melee attack.

He may sometimes glow red and dash in a zigzag to reach your other side, but this doesn't damage you.

When Raven Beak throws a black orb at you, if you are holding R you can lock on until it is targeted four times, then press Y to destroy it. Or you can shoot it with four missiles it destroy it. It will drop some energy and ammo.

When Raven Beak creates a glowing field that covers most of the area above you, switch to Morph Ball form to avoid the attack. This may trigger a sequence where you can watch for the flash and perform a Melee Counter, then watch for another flash and perform a Melee Counter, then shoot rapidly after that until the camera angle goes back to normal.

If Raven Beak is not in melee range and glows red and reaches backward, try to do a Melee Counter when he flashes as he goes in a straight line toward you. This may also lead to the sequence where you can perform one or two Melee Counters, then shoot rapidly, as described in the previous paragraph.

If Raven Beak beckons you, quickly enter melee range and do a Melee Counter when you see the flash. This will lead to the sequence where you can perform one or two Melee Counters, then shoot rapidly, as described in the previous paragraph.

During a cutscene, Raven Beak will extend his wings, and will be flying during this phase.

If Raven Beak aims a small aiming laser at you, you will need to do a Screw Attack around him to avoid the barrage that he shoots at you. Don't touch him or you will take damage. You can try shooting him as you spin.

If Raven Beak faces left or right and aims diagonally downward, use Flash Shift to quickly dash under him to avoid where the beam is aimed.

If Raven Beak swoops downward and starts glowing orange, press ZL to slide under him and avoid his attack.

If Raven Beak flies up to the ceiling, Flash Shift left or right to avoid when he flies straight down.

Eventually, when you have done enough damage, Raven Beak will lose his wings and you will start the third phase of battle.

During the third phase, Raven Beak will no longer fly, but can use most of the attacks from both the first and second phase of battle.

Raven Beak can create a large fireball that floats to the top of the room. When you see Raven Beak creating the fireball, quickly use a Power Bomb to destroy it. If you don't, it will periodically send out a ring of energy that has gaps in it. You will need to go through those gaps while also avoiding Raven Beak's attacks, which may include powerful shots from his arm cannon, and melee attacks that you need to jump and Flash Shift to dodge.

If Raven Beak floats upward with vertical lines around him, he is about to quickly fly left or right. This can't be countered, so Space Jump upward. As he flies across the room, he can quickly fly straight up to hit you, so you may need to Flash Shift above him in the opposite direction to avoid this.

After you defeat him, there will be a cutscene. Then when the large monster is approaching you, hold the Y button to fire it constantly until there is a cutscene, and a countdown begins. 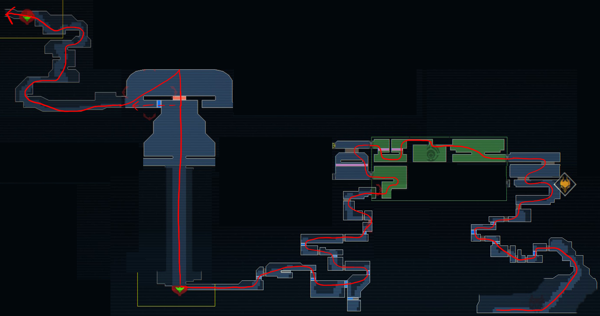 Your Hyper Beam destroys all types of hidden blocks, so you may want to just hold the Y button the entire time, and aim it wherever there is a dead end.

When you destroy the blocks in the ceiling, start going up and to the right. You will see the Total Recharge Station, but you no longer need to worry about health or ammo, so just ignore it.

Face the door on the left and hold Y to constantly fire the Hyper Beam at it until it is destroyed.

Congratulations! You won! Your save slot will be updated with a Federation logo, and you can use that save slot to start a new game while still keeping your ending rewards on that save slot. See Ending Rewards for more details.