After you gain a new ability in Burenia, you return to Dairon to destroy the yellow E.M.M.I., also known as E.M.M.I.-04SB.

After the shuttle from Burenia arrives in Dairon, go to the right and go through the door. Make your way to the right side of the room and you find an E.M.M.I. Zone Door. When you are ready, go through. 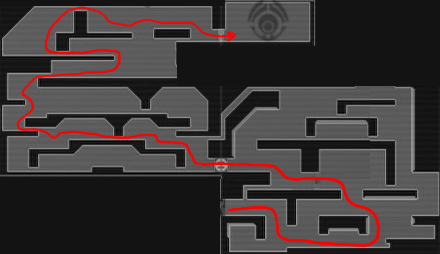 Go through the water on the right until there is a blue wall that you can climb up. From there, go to the left and run through the shutter. The pressure plate will cause the gate to close behind you, delaying the E.M.M.I. if it is following you. Then shoot a charged shot at the door on the left and go through. 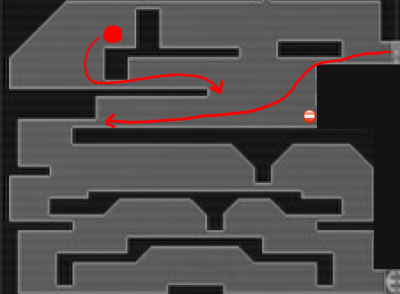 Go to the left, but make sure that you don't end up in the dead end beneath the door of the Central Unit's room. Go to the lower left. This E.M.M.I. moves very quickly, so don't count on having enough time to destroy its heat shield from here. It will slow down when you are hitting its heat shield, but if your aim is off, the E.M.M.I. can quickly close the distance, so be prepared to run.

Slide through the tunnel on the left, then go to the right, where there is another tunnel. Turn around, and either hold L and Y to destroy the heat shield if you haven't already, or hold L and R to charge up the Omega Cannon, then press Y when the cannon is fully charged.

Once the heat shield is destroyed, the E.M.M.I. move more slowly.

You can also use the Speed Booster to perform Shinespark. When you are going at maximum speed during a Speed Boost, tilt the left control stick down, and you will temporarily turn purple. If you press B before you turn back to normal color, and tilt the left control stick in the direction that you want to go, and you will launch yourself in that direction. You will continue going in that direction until you hit a wall. This will also break any Speed Booster Blocks in the way.

If you have Speed Boosted, then tilted the left control stick downward and turned purple, you can crouch or enter a tunnel to switch to Morph Ball form, then press B before you turn back to normal color and tilt the control stick to perform a Shinespark while in Morph Ball form.

Get an Energy Part

Look at the map to see the location of the Central Unit, and the nearby Energy Part. Starting from the tunnel at the left side of the room, do a Speed Boost toward the right and you will break through two walls of Speed Booster Blocks. Go back to the left to get the Energy Part.

Get a Missile+ Tank

It's difficult to perform this, so don't worry if you don't make it.

Get an Energy Tank

Go back down to the platform below the Missile+ Tank, then go into the tunnel on the upper left. Use a bomb to break through the blocks above you. Go upward and you find an E.M.M.I. Zone Door. Go through.

Get a Missile Tank

Go through the door at the upper right. Jump up onto the ledge above you, then go through the tunnel on the left to reach the platform above. Go up and to the right until you see an unknown item above a blue ceiling. Start speed boosting to the right. Jump over the gap while Speed Boosting, then jump up at the end of each ledge you encounter, while still Speed Boosting. If done correctly, you will break through the Speed Booster Blocks at the upper right of the room. Don't worry if you don't make it: the E.M.M.I. Zone Exit here just leads to a dead end for now, so go back to the E.M.M.I. Zone.

Go through the bottom right door of the E.M.M.I. Zone and you will see the Wide Beam Box that you shot out of the way earlier. Go through the door on the right and you will be in a Save Room. Save if you wish, then start Speed Boosting to the right and shoot the door so you can Speed Boost through the door. When you reach the raised part of the floor, tilt downward on the left control stick to ready a Shinespark, then press B and tilt upward on the left control stick to perform a Shinespark through several sets of Speed Booster Blocks above you. Go to the left to get the Missile Tank there, then go to the left and drop down below and use the Teleportal to return to Artaria.