After you gain a new ability in Dairon, you return to Cataris to destroy the green E.M.M.I., also known as E.M.M.I.-03MB.

Go to the left and go through the E.M.M.I. Zone Door at the end.

Drop down to the nearest platform below you, and carefully make your way downward room by continuing to fall onto the nearest platforms below you. (As mentioned previously, the farther you fall, the more likely it becomes that you will land near the E.M.M.I. and be detected.) The E.M.M.I. may come out of the tunnel at the bottom of the room, so be watchful as you go downward. Depending on where the E.M.M.I. is, you may wish to escape through the E.M.M.I. Zone exit at the bottom right of the room. If you do, you can optionally slide down the slope and go left to reach a Save Room, and save the game before you proceed. Then return to the E.M.M.I. Zone when you are ready.

At the bottom left of the E.M.M.I. Zone, there is a door with a Wide Beam Cover on it. Shoot it with a normal shot (not a charged shot), then shoot the door to open it, and go through.

Your goal now is to reach the upper left of the room without letting the E.M.M.I. see you. Jump up onto the ledge above you, then jump up onto the next ledge above you. Go to the right and grab the blue wall, and climb along it until you can land on the platform at the top. From there, go to the left, shoot the red thing in the base of the wall, and keep going left until you reach a door. Before you go through, slide through the gap on the right and shoot the red thing at the base of the wall. Then go through the door on the left to reach the Central Unit.

Hold L and Y to destroy the heat shield on the door, then hold L and R to charge up the Omega Cannon, and when it is charged up, shoot the door to open it. 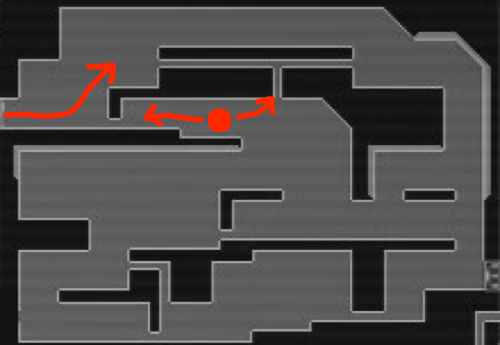 Get a Missile Tank

The door on the right is sealed, so go to the left until you reach a narrow gap in the wall in the bottom left of the area. Push against the wall beneath the gap, then press B to automatically climb up and roll into the gap.

Go through the tunnel, and at the end you will see a Missile Tank.Push against the left wall and press B to automatically roll into it and get the Missile Tank.

Get a Missile+ Tank

Go through the E.M.M.I. Zone Door to the left of where you just got the Missile Tank. Roll through the tunnel, pressing B to jump while in Morph Ball form, and avoid the creatures in the way. When you fall down below, you will be in front of a statue with a tunnel in its mouth. Roll through this tunnel, then when you emerge on the other side, shoot the red thing in the ceiling to give yourself a way back.

You can use the Ammo Recharge Station if you wish, then shoot the ceiling above the door on the left, then jump up through where the blocks were, and shoot the bottom block of the left wall. Slide into it. Keep going to the left, and at the end of the path, you can optionally go through the door to reach a Save Room. Afterward, leave the Save Room and jump up into the tunnel in the ceiling. Roll to the right to get a Missile+ Tank.

Go to the left (but not too far, or you will fall through a Pitfall Block) and use the teleportal. It will take you to Artaria.