After you reach Kakkara Desert, escape the Sandship and learn that Salamando is missing, you go to Ice Country.

The only clues you receive from the walrus people of Todo Village are that the village is becoming unseasonably warm, and there is a paradise hidden in Crystal Forest. Could it be that Salamando is being used to create a warm paradise in Ice Country?

The item shop of Todo Village sells the same stuff as the merchant in Kakkara Village.

Watts is in the armor shop if you have any weapons that can be forged.

When you're ready, use the village's west exit to reach Frosty Forest.

In the first screen, the only exit is in the southwest, so go there by whatever route you wish. There are Howlers in this area. They are very strong. I don't recommend charging up your weapons to fight them. Better to knock them down as often as possible to prevent them from getting up and attacking you.

In the next area you find Rudolph the red-nosed reindeer. Talk to him to learn that a monster has captured Santa in the Ice Palace. Go into the house (Santa's house) to get a Spear's Orb. You should probably go back to Todo Village and get Watts to forge the spear for you.

When you're ready, go south from Santa's house. From there, follow the path. You will pass by Cannon Travel. The exit from this area is west, so follow the path and go toward the west.

In the next area, the north path is a dead end, so go south. There are LA Funks in this area that can't be harmed with weapons. The exit from this area is northwest.

The Boreal Face will attack. It is very similar to Tropicallo. Magic hardly causes any damage to Boreal Face, so just use your weapons. Don't touch Boreal Face's protective shell because it will hurt you. Have everyone charge up weapons to deal maximum damage. You can hit the Brambler to stop it from growing toward you for a while.

After you defeat Boreal Face, you get the Bow's Orb.

You'll automatically run north to a highly suspicious town that is warm in spite of being in the middle of Ice Country. Talk to the green guy standing below the furnace in the middle of town. He asks you to take over for him and watch the stove. Open it when you're asked. Salamando will pop out and thank you. He'll give you his magic.

The Scorpion Boss and underlings will leave now that their resort town has frozen over. Before they leave, they'll say that they don't have the Fire Seed, but one of them will mention seeing an old man in the Ice Palace.

You can now level up Salamando's magic to level 3. You'll have to wait until you retrieve the Fire Seed to be able to go to level 4. You can go back to Todo Village to level things up if you wish. Keep in mind that magic levels up more quickly if you cast the spells in an area where you are holding your weapons.

When you're ready, go north from the resort town.

The path in the next area eventually splits, with one path going east and the other path going north. If you go north, you find Neko. You can restock your supplies and save the game with him. If you go east at the split, you will reach the Ice Palace.

Go north through the door. Inside, go to the right and up the narrow corridor. Step on the switch and go up the stairs that you can now reach.

There are Ice Drops here. They can frosty you, turning you into a snowman. They also deal a lot of damage. Go through the door in the north wall.

There are Specters in here. Grab the Glove's Orb from the chest, then leave.

Go back to the room with the two bridges and the LA Funk. Go through the door on the left. You may want to have Primm use Blaze Wall on the enemies in this room so you can quickly go to the left, step on the switch, then go up the bridge that you created and go through the door.

In the room with all the Specters, step on the right-hand switch, then go through the door that appears.

There is a Weepy Eye in the next room. Go up the stairs.

The Mystic Books in this room cast Lucid Barrier, preventing physical attacks from affecting them. Feel free to use Blaze Wall to stop them in their tracks for a while. The path splits early on. Go south at the first split. Then there's an area that looks like a dead end, but you can actually walk below the bottom-most bookshelf to reach the path on the right. There is a Weepy Eye in this path. Go north past it and through the door.

In the next room, the door disappears behind you. Go to the north end of the room and step on the switches. A hole opens below you.

Down below, you encounter three Biting Lizards of the same type that you fought when you rescued Undine. Only target one Tonpole at a time so they don't all turn into Biting Lizards at the same time. Use the Targeting feature so your other characters will only go after one of the monsters at a time. Also, make sure everybody stays far away to avoid letting the Biting Lizard grab you with its tongue. You can use magic if you want to, but these guys are not the final boss, so you might want to conserve your MP.

After the Biting Lizards are defeated, you return to the last room, and a door is open to the north. Go through it.

There is a Blue Drop to the north. Go north and use the whip to get across the gaps. Follow the path and step on the switch in the middle. You'll be warped to a new area.

There are three Weepy Eyes in here. Go through the door. In the next room, someone tells you to go away. Say no. Frost Gigas will attack.

Have Primm use Blaze Wall and have Popoi use Exploder. After you cast the spells, be sure to wait for the damage to be inflicted rather than doing rapid-fire magic, because otherwise the damage won't have time to show up, and you'll just be wasting magic. The battle will be pretty easy if you have leveled up your magic.

You'll get the Boomerang's Orb. After you defeat Frost Gigas, he turns into Santa Claus. He had taken the Fire Seed thinking it would turn into a giant Christmas Tree that would get kids to believe in him again. Instead, it turned him into a monster. He gives you the seed.

There is a Cannon Travel place in the Crystal Forest. It's just south of Santa's house. Use it to go back to Kakkara to return the Fire Seed. 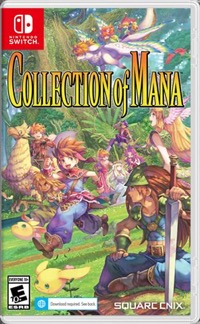 Secret of Mana for Android
Get help with games!
Go to list of all games

Secret of Mana for Android